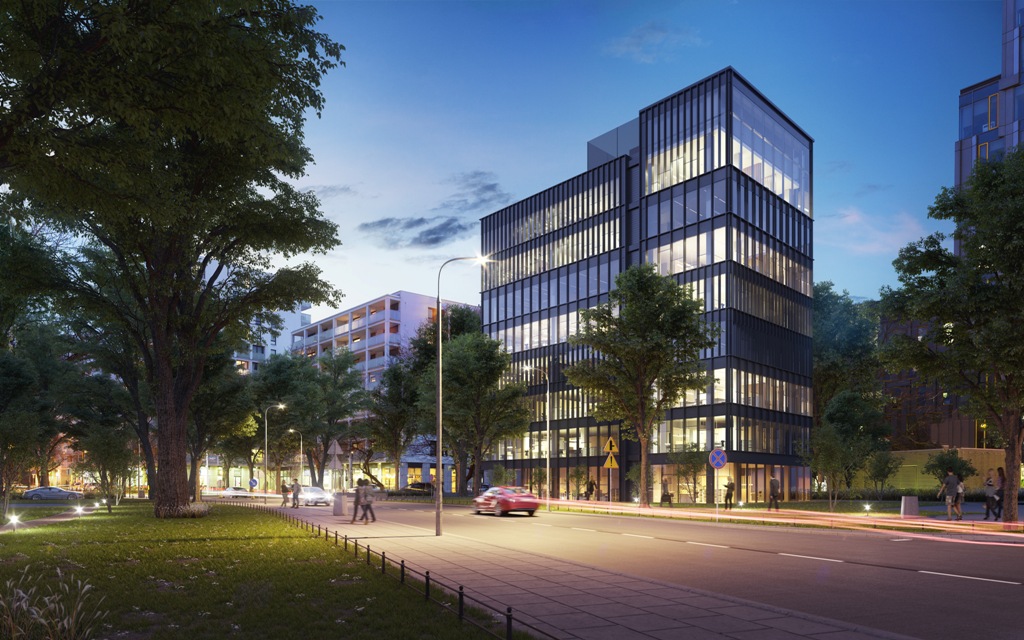 Interior finishing works have already started in the common areas of the EQ2office building, which is being developed by Grupa Warynski at the intersection of Wschowska and Ordona streets in Warsaw. The assembly of the glass façade is also nearly finished.

Construction of the investment is going according to the adopted schedule. The general contractor has already completed construction and reinforced concrete works, as well as works related to covering the roof of the building. Sanitary and electrical infrastructure is now being installed in the office building. The assembly of the EQ2 glass-aluminum façade is progressing quickly – it is 70% ready. Moreover, works related to interior finishing have also recently started.

– We are just entering the second half of the construction of our new office project. The next stages of construction works are being finished according to the schedule. The assembly of the façade of the office building will be completed soon. I hope that the finishing stage of the building will be carried out equally efficiently and, according to the assumptions, the first tenants will start moving into EQ2 in the first months of next year – says Bogdan Borkowski, Chairman of the Management Board of Warynski S.A. Grupa Holdingowa.

The eight-storey, cozy EQ2 office building is emerging in the vicinity of the EQlibrium office building, which was handed over to tenants in 2017. Architects from the OPEN Architekci studio designed the building in such a way as to close the frontage of Juliana Konstantego Ordona street, which, after the expansion of the surrounding infrastructure, is to become one of the main traffic routes of the Odolany area. The investment is located near al. Jerozolimskie, al. Prymasa Tysiąclecia, Kasprzaka streets, and also nearby the Warsaw Western Railway Station, which, after the reconstruction, will become one of the largest transport junctions in the Warsaw agglomeration.

The prestigious office building with a two-level underground car park offers over 4,300 m2 of Class A floor space. – Each level of EQ2 has approximately 370 m2 of office space to be arranged according to the individual requirements of tenants. Bartłomiej Zagrodnik, Managing Partner / CEO at Walter Herz, which is a leading agent for commercialization of the investment, informs that there is also a retail and service space of 186 m2 on the ground floor, with large glass windows facing Ordona street. The entrance to this area, as well as the main entrance to EQ2 and the garage entrance, are located at Wschowska street.

The exclusive nature of Grupa Warynski project will be emphasized by the spacious green terrace on the roof of the building. In the immediate vicinity of EQ2, near Ordona street, there is also a green area, which has been carefully selected for city hives. The hives will be placed in the flowery part of the green terrace. In addition, the surrounding attractive recreational areas will contribute to leisure.

Not only the surroundings of the building, but also its interior will be immersed in the greenery. The developer implements all its projects in line with the concept of sustainable development. It takes care of both the safety and well-being of people working in the building. In the vicinity of the office building one will find numerous shops, cafes and restaurants, as well as a gym and Zdrofit fitness club. The nearby tenement house, which will soon become an external art gallery, will add color to the surroundings. An additional advantage of the office building is the use of environmentally friendly solutions in the building, which will be confirmed by the BREEAM certificate rated Very Good.

“House with a climate” campaign