In Warsaw, new flats already cost over PLN 10,000/sqm in half of the districts 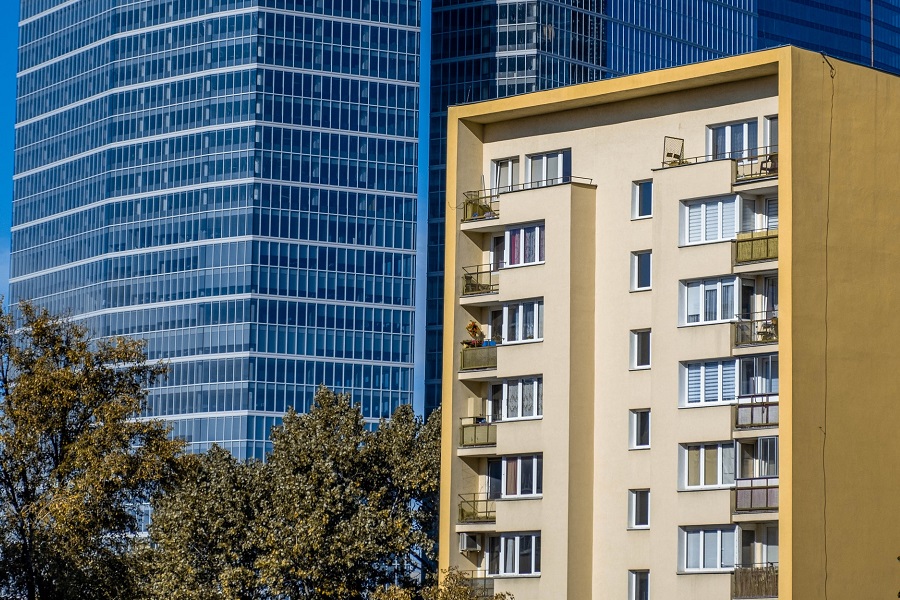 The coronavirus has not stopped the rise in prices of flats in the capital, which, according to a report prepared by Emmerson Evaluation, increased on average by 7% in the primary market and by 8% in the secondary market. Already in half of the districts the price per sqm from the developer exceeded the ceiling of 10,000 PLN, and in one in three such rates were reached by flats on the secondary market. Last year, the Warsaw flat market also suffered from declines, but these concerned the total level of the offer, as well as the number of newly introduced flats.

Warsaw remained the runner-up among the most expensive flats in Poland with the median[1] price per sq.m. approaching PLN 11,000. Last year, one had to pay PLN 10.8 thousand per sq.m. for a new apartment, and PLN 9.8 thousand per sq.m. for a second-hand flat. In terms of prices, the capital is overtaken by Sopot with the median amount of 16.7 thousand PLN. Krakow closes the podium of the most expensive cities (9.8 thousand zlotys/sq.m.), according to the report “Evaluer Index 2021”, in which experts from Emmerson Evaluation analyzed residential markets of the largest Polish cities and their districts.

– The Warsaw real estate market has for years been led by the city centre, where the median price per sqm in 2020 increased by 4%, reaching PLN 20,000. It was also expensive in other central districts, as well as in the area of the 1st and 2nd metro lines. In Wola, which has become very popular in recent years, the median price per sqm increased by 9% and amounted to PLN 13.4 thousand. Most development investments are intensified in Odolany, where flat prices oscillate around PLN 11,000/sq.m. Due to the intensive development of the eastern part of Wola, in the vicinity of the Daszyńskiego roundabout only a few residential investments remained on sale, which due to their proximity to the city centre and their standard are much more expensive – lists Robert Korczyński, member of the Emmerson Evaluation board.

The biggest price increase was recorded in Bielany, where they rose by as much as 16% over the year, reaching the level of 12.6 thousand PLN/sq.m. Such rates were also paid by buyers for flats in Mokotów, where prices rose by 14% y/y. In Ochota, the median price per sq m was recorded at PLN 13.5 thousand, up 13% on 2019.  On the other hand, the prices of flats in Żoliborz turned out to be quite stable (an increase of 3%), units in this district cost PLN 12.4 thousand/sqm. Developers are mainly introducing higher-standard projects in these areas, which also translates into higher property prices, the report’s authors point out.

In the right-bank part of the city, both Praga districts remain the most expensive. In Praga-Północ, Emmerson Evaluation analysts recorded a median price exceeding 13.5 thousand zlotys/sq.m., which was 11% higher than a year ago. Some of the most expensive flats in this district were found in investments located in the Okrzei Street area. The reason for the increased popularity, and consequently for the higher prices of flats, may have been the extension of the second metro line by Szwedzka station, similar to the situation in Targówek (price increase of 3% y/y), where new stations have been opened and another extension of the metro line is planned. In Praga-Południe, on the other hand, the median price of new apartments stood at PLN 10,200/sq.m. (an increase of 6%). The areas of Kamionek and Grochów continue to develop intensively. Much more expensive investments were located in the area of Gocław, where one had to pay more than 12 thousand zlotys per square meter. The cheapest first-hand flats could be found in Rembertów (PLN 7.5 thousand/sq.m.), Wesoła (PLN 7.7 thousand/sq.m.) and Białołęka (PLN 7.9 thousand/sq.m.), where prices increased slightly over the year, by 4-5%.

In the analysis of prices per sq.m., the median value was adopted, which reflects the price information better than the average one, as its value is not influenced by single, untypical transactions (such as purchase of one exceptionally luxurious property).

The secondary market was not spared by the increases

– The good situation on the primary market translated into the secondary market, where we noted an increase in median prices in all parts of the city. Dynamic price increases (9% y/y) were observed in districts that are very well connected with the city centre and have been popular among buyers for years, such as Ochota, Wola and Praga-Północ. Areas where further stages of the 2nd line and the 3rd underground line are planned have also gained in attractiveness – points out Robert Korczyński.

On the secondary market, the podium of the most expensive districts is occupied by Śródmieście (PLN 12.7 thousand/sq.m., with a 3% y/y increase), Żoliborz (PLN 11.4 thousand), where the increase in prices of flats (by 6%) was higher than on the primary market, and Wola, where flats have grown more expensive over the year (by 9% to PLN 11 thousand/sq.m.). The cheapest second-hand flats, as in the case of new flats, could be found in Rembertów (PLN 6.9 thousand/sq.m.) and Wesoła (PLN 7 thousand/sq.m.), as well as in Wawer (PLN 7.5 thousand/sq.m.), where prices during the year increased minimally, by 2-3%.

Best chances for a flat in Białołęka

Białołęka remained the leader in terms of the size of the developers’ offer in Warsaw, with approximately 19% of all available flats in Warsaw located there at the end of last year. It was in this district that developers added the largest amount of new flats to the offer in 2020 (over 3,000 units). The largest number of investments were conducted in Żerań, Tarchomin and Nowodwory. Developer investments were mainly subsequent stages of residential estates under construction. Large supply of new investments was also present in Mokotów (15% of all available flats), where developers introduced almost 2,500 new residential units for sale last year.

– The areas in Stegny and the Służewiec district continue to develop intensively. New investments can be found in practically every part of the district. In terms of price, some of the more expensive ones were recorded in the area of the first metro line, near Pola Mokotowskie. Flats in the neighbourhood of Łazienki Park, where private high-standard investments are being developed, were also more expensive – adds the Emmerson Evaluation expert.

According to Emmerson Evaluation experts, a continuation of the residential price increases can be expected within the next year. According to forecasts from the Evaluer Index 2021 report, increases on the residential market in Poland’s largest cities may range between 3-8%, and demand is strong enough to drive the market to further records.

The pandemic favours the smaller, with almost ¾ of retail schemes under construction being under 20,000 sq m.

Is housing on the outskirts of cities popular?