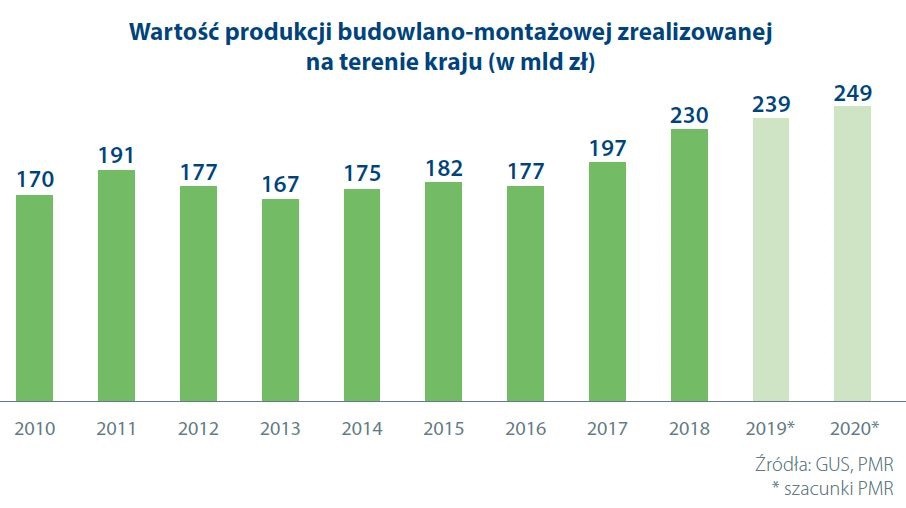 Economic Information Bureau InfoMonitor in cooperation with the Polish Association of Construction Industry Employers presented the report “Situation of the construction industry. Improvement of the condition of the sector in the conditions of moderate economic downturn”. We will find in it a summary of the first half of 2019 on the domestic construction market and the characteristics of the situation in terms of financial arrears of companies from the construction sector.

Better results despite the weaker economic situation in the construction sector

The data presented in the report show that the moderate cooling of the economic situation observed in the first half of 2019 turned out to be paradoxically beneficial for the sector. A slightly smaller number of realized investments translated into stabilization of prices of raw materials, materials and services, as well as into a slowdown in the dynamics of salaries on the construction market. In addition, most construction groups have recently focused on selective selection of potentially profitable orders. All this, in turn, allowed for a certain improvement in the financial standing of construction companies. They generated twice as much net result as in the corresponding period of last year. Net profitability has also improved, but it still remains at a low level. In the case of large companies, net profitability amounted to 1.2%, and small and medium enterprises achieved it at the level of 5-9%.

What will the next years bring in?

There are many challenges ahead of the companies under construction. Many road and railway contracts co-financed from the ending EU budget for the years 2014-2020 have still not been settled yet. From 2021, a new public procurement law will be in force. The amount of funds allocated to Poland from the budgetary perspective for the years 2021-2027 is not known, but it is difficult to assume at present that they will be greater than in previous years. On the other hand, construction companies strongly count on increasing the role of projects implemented under public-private partnerships and on accelerating investments in the field of power engineering and hydrotechnics.

The five largest office buildings in 2020 will open in Warsaw. They will occupy as many as 28 football pitches