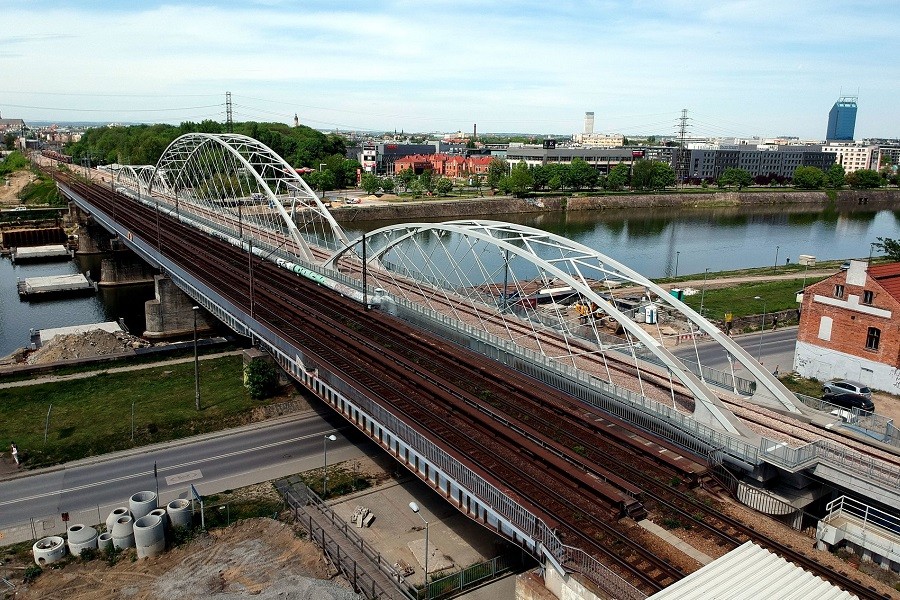 The new railway bridge over the Vistula River in Krakow is already running trains. This is the first of three crossings that PKP Polskie Linie Kolejowe S.A. will build by the end of 2021. Thanks to the additional tracks, the possibilities of passenger transport in the south of Poland and in the agglomeration will increase. The investment worth over PLN 1 billion is co-financed under the CEF “Connecting Europe” facility.

It will ensure efficient long-distance, regional and agglomeration travel. It is 234 meters long and almost 9 meters wide. It consists of three arched spans, the highest of which rises to over 18 metres high. It weighs about 8 thousand tons. Trains will follow it at 100 km/h. In the evening of May 29th, the trains running on the crossroads from Main Cracow to Plaszow went over the new railway bridge over the Vistula.

– A new railway bridge in Krakow is opened to traffic. We invest in modern railway in the whole country – among others in large agglomerations. The new infrastructure means greater possibilities for agglomeration transport and a significant reduction in travel time. We are consistently striving for the goal of a safe, comfortable and predictable Polish railway – said Andrzej Adamczyk, Minister of Infrastructure.

Another step to better travel

Train travels on the new track are the beginning of the next stage of Krakow’s investments.

– The investments of PKP Polskie Linie Kolejowe S.A. in Krakow are so extensive that they can be compared to the construction of a new railway. New stops, bridges and flyovers increase travel opportunities for the residents of the agglomeration, Poland and international passengers. The railway is becoming more accessible – said Ireneusz Merchel, President of the Management Board of PKP Polskie Linia Kolejowe S.A.

The contractors will proceed with the demolition of the old diameter bridge. It will be divided into fragments, which after the renovation will be used again on the railway network managed by PLK. After dismantling the existing structure, construction of the next two crossings will begin. The central one will accommodate two railway tracks. On the western one there will be room for one track, and next to it there will be a foot and bicycle bridge.

The new railway bridges over the Vistula River in Krakow are part of one of the largest railway investments in southern Poland. As part of the modernization of the Krakow crossroads between the Main Cracow and Krakow Plaszow, the possibilities of rail travel are increasing. Travellers will use the new Krakow Grzegórzki stops at Hala Targowa and Krakow Złocień. The remaining stations and stops will provide higher comfort and will be accessible to all travellers. There will be two additional tracks for agglomeration trains, and one track between Krakow Plaszoww and Krakow Bieżanów. Flyovers and viaducts are being built in the city centre.

The project “Works on the E30 railway line on the Krakow Główny Towarowy – Rudzice section together with the extension of the agglomeration line tracks” worth PLN 1 billion is co-financed by the European Union under the CEF “Connecting Europe” instrument. www.krakow-rudzice.pl

The next tenders for S19 sections in Podlaskie Voivodship

The epidemic has delayed the pace of housing construction?

Multi-storey car park in the center of Katowice