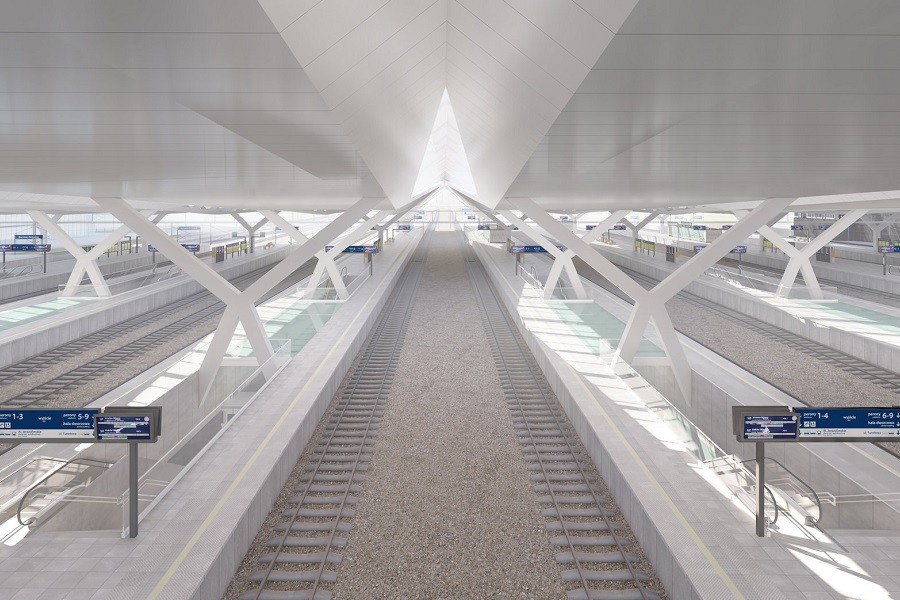 Travelers at Warszawa Zachodnia station will be comforted by new roofed platforms, escalators, lifts, information system and wide passages. Agglomeration and long-distance crossings will be more efficient. PKP Polskie Linie Kolejowe S.A. has signed an agreement with Budimex S.A. for station modernisation. The investment, for over PLN 1.9 billion net, will be completed by 2023. The project applies for co-financing from the Infrastructure and Environment Operational Programme.

At the Warszawa Zachodnia station, the travellers, thanks to modern systems and technologies, will gain service at the highest level. The management of rail traffic at the Warsaw railway junction will be more efficient.

– The reconstruction of West Warsaw is a revolution on the transport map of Warsaw. Every day thousands of passengers use this station. After the completion of the reconstruction, more long-distance and suburban trains will appear. This is another step on the way to a safe, comfortable and predictable Polish railway. This is how the implementation of the bagpipes plan looks like in practice, the contract signed for PLN 2 billion will create nearly 500 jobs in the reconstruction of the station itself – said Andrzej Adamczyk, Minister of Infrastructure.

– Poland has been implementing railway investments co-financed from EU funds for years. Only in the perspective of 2014-2020 we have reserved over 40 billion PLN in the EU budget for the expansion and modernisation of railway lines and facilities in our country. Rail will also be an important area for investing European money in the new perspective – said Grzegorz Puda, Deputy Minister of Funds and Regional Policy.

– Rebuilt by PKP Polskie Linie Kolejowe S.A. Western Warsaw will be the most modern railway station in Poland. Every day thousands of passengers of agglomeration and long-distance railway will gain attractive journeys and efficient connections with public transport. Warszawa Zachodnia will be adapted to the needs of all passengers. New possibilities of the station will increase the role of the railway in the communication system of Warsaw, Mazovia Province and Poland – said Ireneusz Merchel, President of the Board of PKP Polskie Linia Kolejowe S.A.

New Warszawa Zachodnia for all

All platforms will be roofed. There will be escalators and lifts adapted to carry carts and bicycles. The station will be fully accessible for people with reduced mobility. Clear signage and a passenger information system will facilitate the use of the railway. An additional platform on the side of Tunelowa Street will increase the possibility of running trains.

Communication in the station area will be facilitated by a footbridge, which will connect Wola and Ochota. The underground passageway will be completely changed – it will be higher and wider and connected with the waiting room and ticket offices. The crossing will also be extended to platform no. 8 at the ring line.

At Warszawa Zachodnia station, the new track layout will enable trains to travel from the ring line to the Radom line and create direct connections between Piaseczno – Legionowo and Legionowo – Chopin Airport. Approximately 30 km of tracks, 130 crossings and the catenary network will be comprehensively rebuilt.

Travellers will use trains during the reconstruction of the station

During the reconstruction of Western Warsaw, train traffic and passenger service will be maintained. First of all, the construction of an underground passage from the side of the ring line, i.e. platform no. 8, will be carried out. The local railway traffic control centre and a new platform from the side of Tunelowa Street will be prepared, among others. The contractor will begin construction of a footbridge on the eastern side of the station. Thanks to this solution, access to the platforms will be provided during the reconstruction of the existing underground passage. Basic track works will start from Tunelowa Street and will be carried out towards Jerozolimskie Avenue. The investment is planned to be completed in the second half of 2023.

The works at the station are carried out under the OPI&E project 5.1-13 entitled: “Works on the crossroads in Warsaw on the section Warsaw East – West Warsaw”, which applies for co-financing from OPI&E funds up to 85% of eligible expenditure, and the OPI&E project 6.1-22 entitled: “Construction of a tram route to Wilanów together with purchase of rolling stock and accompanying infrastructure”.

Synthos and Vattenfall: co-operation within the Offshore Wind industry

Over 2,000 apartments under construction in Flat+ scheme

Estate of wooden houses will be built in Środa Śląska