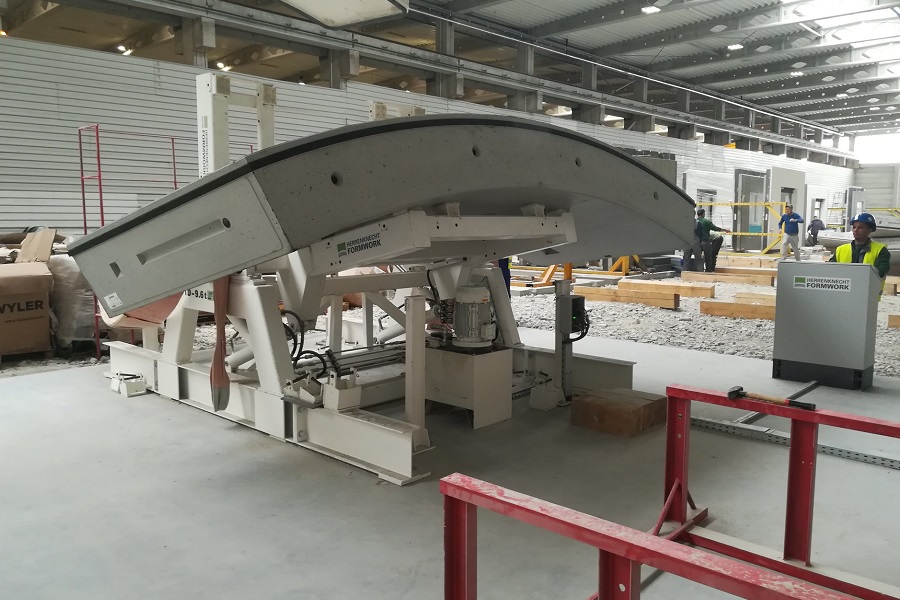 The construction of the Łódź Fabryczna – Łódź Kaliska / Łódź Żabieniec connection has been extended by new contractors. The production of 30 thousand elements of the tunnel casing, so called tubings, has started in Mszczonow district. The semi-circular parts of the walls will ensure safe passage of the tubing under the city. The investment for more than 1.7 billion PLN carried out by PKP Polskie Linie Kolejowe S.A. will increase the possibilities of railroad connections. The project is co-financed by the EU OPI&E.

– The construction of the cross-town tunnel is a very important investment, which will enable the development not only of the city, but also of the entire region. Thanks to the junction underneath Łódź, a “small subway” will be built every day to enable efficient communication for the inhabitants of the city. It is also an important undertaking in the context of long-distance national and international connections, which will increase the investment and tourist potential of the Lodz region. The junction can be made more accessible thanks to the funding from the European Funds, the Infrastructure and Environment Program – emphasized Waldemar Buda, Deputy Minister of Funds and Regional Policy.

In Lodz, the contractor is preparing the launch chambers, from which TBM machines will start. On the square at Długosza Street, a small shield is mounted from the brought elements. The works also include excavating the diaphragm walls and preparing the starter chamber. In the area of Stolarska and Odolanowska streets the walls of the chamber for a large TBM machine were made. Ultimately, the chamber will be 26.5 m deep and up to 30 m wide. Specialized equipment will be used in both locations. After the preparation of the launch chambers, the complex disks will start digging tunnels. The first works are planned in December this year.

Parallel to the activities on the construction sites, design works related to the underground stops Łódź Polesie and Łódź Śródmieście are being carried out. The contractor includes an additional third stop, Łódź Koziny (working name).

– The investment of PKP Polskie Linie Kolejowe S.A. in Łódź is another step in the development of the railroad network on a regional, national and international scale. We are increasing access to railroads in the area of agglomeration and outside large cities, using funds from EU funds and the state budget. Investments in a modern, safe railroad are also investments in the development of the Polish economy – said Arnold Bresch, member of the Board of PKP Polskie Linii Kolejowe S.A.

The shield will pass through the walls of tubing

The underground route is a two-track tunnel, 3 km long and 4 single-track tunnels with a total length of about 4.5 km, leaving Łódź Fabryczna, towards Łódź Kaliska and Łódź Żabieniec. The walls of the tunnels will be built of tubings. The contractor will use 13 500 tubings for the twin-track tunnel, forming a 12.7 m diameter “tube”. For the construction of single-track tunnels, 16 400 tubes will be produced, arranged in rings of 5 m diameter. Deliveries of the wall elements will begin before the hollows start and will provide a constant stock of tubes for about 2 weeks of work.

Over 100 tunnel casing elements will be produced per day. Every day about 50 trucks with tubes will reach Łódź from the factory. The manufacturer of the tubes is Pekabex S.A.

The TBM technology used in the construction of tunnels in Łódź consists in simultaneous tunnelling and construction of the tunnel. The shield of the “mechanical mole” rotates 3 times per minute and shreds the soil, which is continuously extracted to the surface. As the disc moves, a hollow space is created, in which the rings from the tubing are placed successively. During the day, about 10-15 m of tunnel casing can be created. TBM construction prevents land subsidence, landslides and vibrations, minimizes collisions with urban infrastructure.

The larger of the two TBM machines will arrange a ring of eight tubes, each weighing about 10.5 tons. The smaller TBM will form rings of six segments and the so-called key (the element that closes the ring) – the weight of one segment is about 6 tons and the key is about 3 tons.

The construction of the cross-town tunnel is a continuation of the work begun with the construction of the Łódź Fabryczna station. The investment will provide an effective system of interregional railroad connections and a faster connection through the city center. The Łódź Fabryczna station from the final station will become a pass-through station. Regional and long-distance trains will be able to travel through the very center of Łódź – on the east-west axis (through Łódź Widzew, Fabryczna and Kaliska stations) and on the north-south axis (through Łódź Widzew, Fabryczna and Żabieniec stations).

The project will create new stops, among others, Łódź Polesie and Łódź Śródmieście, which will be integrated with public transportation and will make the residents’ daily travels easier.

The project entitled “Unlocking the Łódź Railway Junction (TEN-T), Stage II, Łódź Fabryczna – Łódź Kaliska/Łódź Żabieniec section” is co-financed under the Infrastructure and Environment Operational Program. The value of the project amounts to over 1.7 billion PLN, of which the EU co-financing is over 1.4 billion PLN.

The tunnel is being built in Łódź in numbers:

Okam with another investment in Warsaw’s Wola district