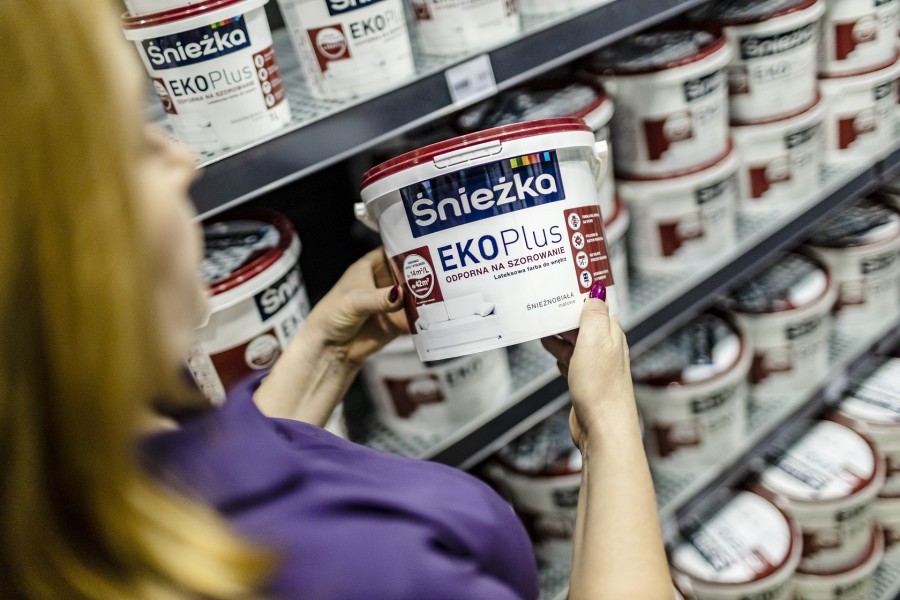 The first quarter of 2021 brought an increase in consolidated sales revenues and profits to the Śnieżka Group. Revenues from the Polish market increased by almost one fifth, which – in addition to maintaining high demand for high-end products – was due to an increase in orders from trading partners preparing for the spring peak of Poles’ interest in decorative products.

In the first three months of 2021, all Group companies generated consolidated sales revenues of PLN 182.6 million, which is 8.8% higher than in the same period last year. The consolidated results of this period were positively influenced primarily by higher sales realised in Poland, which compensated for lower results achieved on foreign markets.

Among the Group’s main markets, the domestic market stood out, where revenues amounted to PLN 126.6 million and improved by 19.5% compared to the same period of the previous year. The increase in the value of sales in Poland was due, among other things, to the continuing trend of premiumisation, as well as an increased level of orders from Śnieżka’s trading partners in all distribution channels before the season, especially in March this year.

– Also in the first three months of this year we observed Poles’ interest in renovating and refreshing their homes with better quality products, such as our Magnat paints. On the other hand, the prolonged winter particularly affected the somewhat lower interest in insulation systems. Ultimately, however, we achieved good results, although the main part of the renovation season is still ahead of us, which is full of challenges. We also bear in mind that last year’s excellent results in the second quarter were built on factors resulting from the then new pandemic reality and the renovation boom connected with it,” Joanna Wróbel-Lipa, Vice-President of the Management Board of FFiL Śnieżka SA, comments on the results.

Sales in the Group’s other main markets – Hungary, Ukraine and Belarus – were in total 8.9% lower than the year before. This was influenced, among others, by the consequences of the COVID-19 pandemic, unfavourable weather conditions, as well as changes resulting from the implementation of a new operating model in foreign companies of the Group.

During the first three months of 2021, the Group’s consolidated earnings and margins increased at almost all levels. Operating profit (EBIT) was PLN 22.0 million (+9.7% year-on-year), while EBITDA was PLN 30.8 million (+9.6% year-on-year). Consolidated net profit improved by 12.9% year-on-year to PLN 17.3m. Profit attributable to the shareholders of the parent company reached PLN 16.3 million (+14.8% year on year).

The results of the Śnieżka Group are significantly shaped by seasonality related to weather conditions, therefore sales results should be analysed after the end of the season (i.e. after the third quarter) and financial results: on an annual basis.

Continuation of investments and record-breaking dividend

The Śnieżka Group is continuing the largest investment cycle in its history. In the first quarter of 2021, an amount of PLN 24.6 million was allocated, the majority of which was consumed by expenditure on the ongoing construction of the new Logistics Centre in Zawada. This investment is scheduled to enter the key testing phase in the third and fourth quarters of this year.

Already after the end of the first quarter, on 29 April this year, the Ordinary General Meeting of Shareholders of FFiL Śnieżka SA decided to pay out the dividend from the net profit for 2020. Its amount was set in accordance with the recommendation of the Board at PLN 45.4 million, i.e. PLN 3.6 per share. This is nominally the highest dividend in the history of the company. Its payment is scheduled for 31 May this year.

Challenges include the effects of the pandemic and raw materials

Challenges for the Group continue to include the difficult-to-predict long-term impact of the COVID-19 pandemic, which may affect both the pace of economic development in countries and consumers’ purchasing power and choices.

The Group is also constantly monitoring the situation in the raw materials market after temporary problems with raw materials availability occurred at the end of last year and in the first months of 2021, which, in the face of strong demand, resulted in higher prices.

– So far, the turmoil in the raw materials market has had little impact on the operations of our production companies and the Group’s results in the first quarter of this year. At present, the situation regarding the availability of raw materials has – with the exception of isolated cases – stabilised. But it is difficult to predict the long-term consequences today, including the level at which raw material prices will stabilise in many industries, not only in Poland, but also globally, adds Joanna Wróbel-Lipa.

Even in a pandemic, there are more places in dormitories

Domy na Pszennej with a topping out roof