The second largest TBM on the way to Lodz 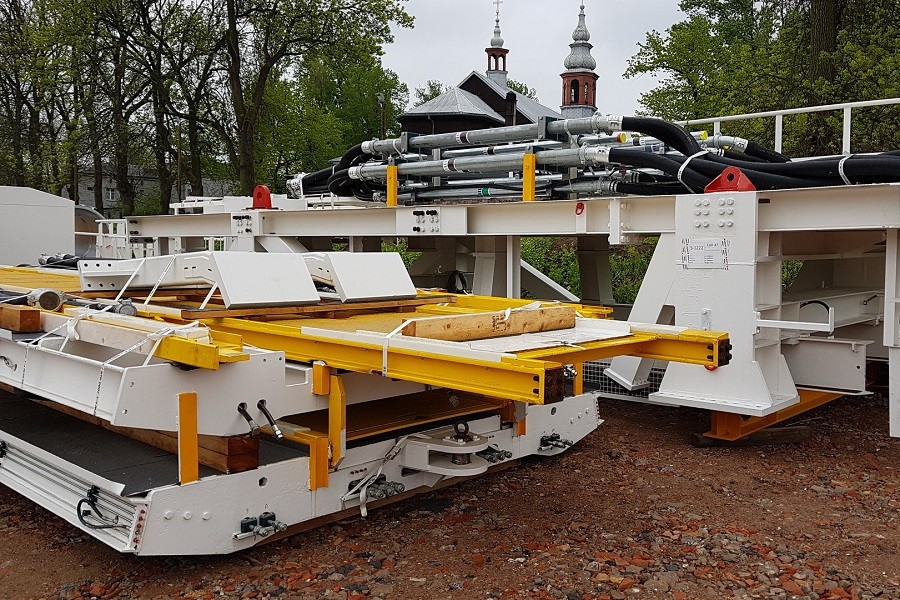 In May, the next elements of the second TBM machine for construction of railway tunnels arrived in Lodz. The contractor provided supplies of tubing – elements for building tunnel walls. The underground route Lodz Fabryczna – Lodz Kaliska/ Lodz Zabieniec will bring new possibilities of national, international and agglomeration railway connections. The investment for over PLN 1.7 billion co-financed from OPI&E.

The second largest TBM is attached to the first disc. In June, two large tunnelling tools will be in Lodz. The contractor has contracted the supply of tubings – elements necessary for the construction of tunnels and is preparing the launch chambers. At the beginning of June it will determine the next stages and dates of work. The implementation of the investment was influenced by problems of the first leader of Energopol consortium and limited possibilities of transporting the elements of the shield due to low water level.

The TBM shield goes in stages and arrives

By road transport, the contractor brought to Łódź one third of all elements of an approx. 1560-ton TBM machine – a “mechanical mole” of 13.04 m in diameter and 110 m in length. The largest of its kind in Poland, the TBM will cut a two-track tunnel from the starting chamber between Odolanowska and Stolarska streets, through a place for underground stops Lodz Polesie and Lodz Downtown, to Lodz Fabryczna station. The large tunnel will be over 2.5 km long and 12.7 metres in diameter.

In May, parts of the cutting head, i.e. the face of the disc, reached Lodz. On it there are blades, knives and cutting discs made of very high strength steel to shred the ground. There are already parts of the casing shell and a worm conveyor, by means of which the excavated material is transported to belt conveyors and further to the surface. Also received in Lodz are the side panels of the machine, tanks, elements of the drilling hole flushing pump, a drum for high voltage cables, parts of the air channel and a device for supporting the air channel. The elements for the TBM crew were also transported by wheel. There is already a container for the staff operating the machine, stairs and platforms for the staff.

The biggest challenge is the transport of oversized shield elements. This includes the main drive with a weight of 180 tons and the heaviest shielding segment – 153 tons. The parts weighing from 40 to 120 tonnes also include the TBM casing parts, the cutting wheel disc, the beam conveyor and the feeder.

The large size of the parts requires transport from Germany to Poland by water – inland waterway and then at night by trucks to Lodz. The company responsible for the untypical transport must take into account the water level in the rivers that the TBM elements will flow through. The low level of the rivers had an impact on the transportation dates. If the conditions are favourable, the transport will take place in May. The delivery of all elements is planned to be completed in June.

The tunnel with tubings

The contractor has already signed a contract for the construction of tubing for the walls of the cross-town tunnel in Lodz. The tubes are rounded elements of the tunnel’s casing, which together form a ring, which constitutes the tunnel’s wall. To build the underground line Lodz Fabryczna – Lodz Kaliska/ Lodz Żabieniec, approx. 26 thousand tubings are needed.

Preparatory works can be seen in Lodz. Between Odolanowska and Stolarska streets a starting chamber for a large TBM shield is being built. As announced by the contractor, the installation of the shield in the chamber will begin in August. After completion of the required procedures – tunnelling will begin.

In Lodz, there is already the first shield which will drill 4 single-track tunnels with a diameter of 8.5 metres and a total length of approx. 3.5 km from the turnout chamber at Włókniarzy Avenue to railway line no. 15 towards Lodz Zabieniec and Lodz Kaliska. The smaller “mechanical mole” weighs about 650 tonnes, has a diameter of 8.76 metres and is 95 metres long. Its parts were transported exclusively by land, using trucks.

The tunnel will connect Poland

The construction of the cross-town tunnel is a continuation of the work begun with the construction of the Lodz Fabryczna station. The investment will provide a faster connection through the city centre and will also contribute to the creation of an effective system of national interregional connections covering the region of central Poland. Thanks to the construction of the tunnel, the Lodz Fabryczna station from the final station will become a through station. The journey time will be shortened and both regional and long-distance trains will be able to travel through the very centre of Lodz – east-west (through Lodz Widzew, Fabryczna and Kaliska stations) and north-south (through Lodz Widzew, Fabryczna and Żabieniec stations).

The project will also include two stops – Lodz Polesie and Lodz Downtown, which will be integrated with public transport and will make it easier for the inhabitants of the agglomeration to get to work and school every day.

The project entitled “Unlocking the Lodz Railway Junction (TEN-T), Stage II, Section Lodz Fabryczna – Lodz Kaliska/ Lodz Zabieniec” is co-financed under the Infrastructure and Environment Operational Programme. The value of the project is PLN 1,764,333,383.70, of which the EU co-financing is PLN 1,434,417,385.13. The design and construction of the tunnel is carried out by a consortium of: Przedsiębiorstwo Budowy Drog i Mostów from Minsk Mazowiecki and Energopol Szczecin. More information on the project website: www.tunel-laczypolske.pl.

Budimex with a contract for the construction of S7 Modlin-Czosnow