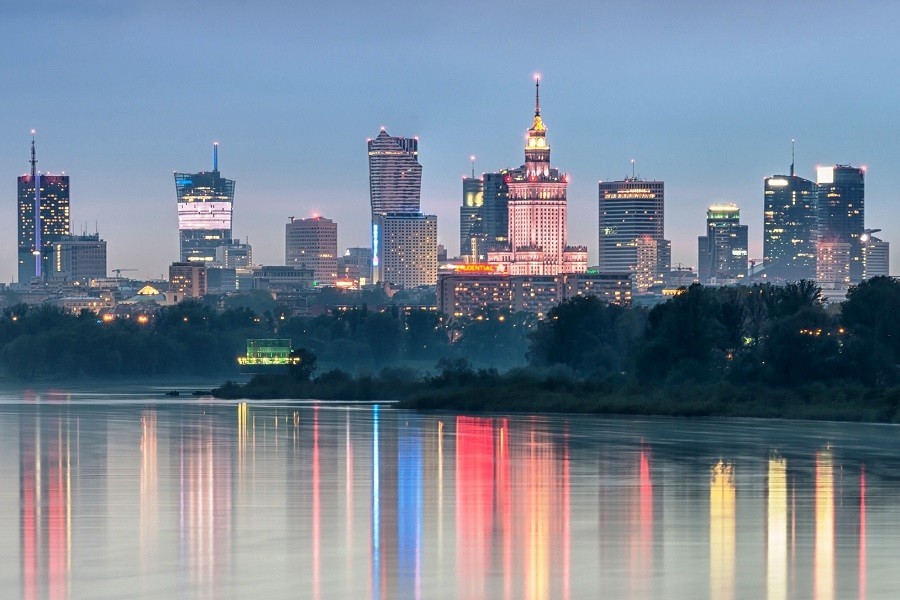 The most spectacular projects that will have the greatest impact on the new image of the city are implemented near the intersection of Prosta and Towarowa streets in Warsaw’s Wola and Śródmieście districts.

According to Walter Herz, there are almost 850 thousand sq m. of office space under construction in Warsaw today. Vast majority of investments are located in the central part of the city. Warsaw market, which already has office resources exceeding 5.6 million sq m. of space is growing rapidly. The demand for offices has been at a record level for many months.

– Interest in office space in Warsaw is huge. Modern facilities emerging in central areas of the city are particularly popular. Commercialization process is very smooth. New office buildings are often fully rented before entering the market. Vast majority of offices under construction are already secured by lease agreements or reservations. There are many indications that the volume of last year’s lease transactions will be the largest in the history of the Warsaw office market. And this year in Warsaw, up to 500 thousand sq m. of space is to be commissioned. About 80 per cent of these offices already has tenants – informs Bartłomiej Zagrodnik, Managing Partner/CEO at Walter Herz.

A tower with a view of Europe

The largest project implemented in Warsaw is Varso mixed-use complex, which will provide a total of 144 thousand sq m. of space. In the first half of this year, two lower buildings are to be commissioned in the investment carried out near the Central Railway Station. It will include modern office and co-working space, retail and service space and the first four-star NYX hotel in Poland. Over 80 and 90 meters high Varso 1 and Varso 2, with a total area of ​​75 thousand sq m. and last facade works as well as finishing and interior arrangement works in progress, are almost completely leased. A public area with food court, shops and services will be created on the ground floors. The construction of the highest office tower – Varso Tower – has already exceeded the height of the 29th floor, and the first elements of the glass facade have been installed on the building. Next year, after entering the market, the 310-meter skyscraper with observation deck will beat still the highest Warsaw Palace of Culture and Science, measuring 237 meters.

Several large, spectacular towers will also be built in the city in a dozen or so ongoing projects. At the intersection of Prosta and Żelazna streets, the 140-meter Mennica Lagacy Tower will soon be commissioned, which together with the already completed 43-meter Budynek Zachodni forms a complex, increasing the resources of the capital office market by 65 thousand sq m. of space. In addition, Chmielna 89 office building located nearby will soon enter the market and will provide nearly 25 thousand sq m. of space.

Moreover, commissioning of The Warsaw Hub, which will have a direct connection to Rondo Daszyńskiego metro station is due in the first half of this year. Ghelamco’s investment located at Towarowa street is to bring 113 thousand sq m. of mixed-use space. The project includes a 86-meter building with Holiday Inn Express hotel and the first Crowne Plaza in Poland, as well as two 130-meter towers. In addition to the highest class office and hotel space, The Warsaw Hub will offer a conference center, co-working space, retail and service premises, as well as a fitness club.

In the area of the new business center that is being developed in Warsaw, around the Daszyńskiego roundabout, Ghelamco also carries out Warsaw Unit investment. Thanks to the commissioning of the 202-meter high-rise building constructed in it, in the first half of next year Warsaw’s office space will gain 57 thousand sq m. of modern space. The building will include an unprecedented in Poland kinetic facade of the Dragon Skin type, which will become a focal point at the intersection of Prosta and Towarowa streets.

This year, Karimpol is planning to complete the construction of Skyliner. The 195-meter high-rise building, which is also growing at Daszyńskiego roundabout, will provide nearly 44 thousand sq m. of lease area. On 30 floors, it will offer modern offices, and the area of four floors will be intended for commercial and service purposes. At a height of 165 meters, the tower will house a two-level Skybar, and “Spanish stairs” in the several meters long hall.

Generation Park complex is also under construction in the new office district in Warsaw’s Wola. In the investment located between Towarowa, Prosta, Wronia and Łucka streets, two office buildings have already been commissioned, and the construction of the last one is moving ahead. The three buildings that make up the complex will provide a total of 84 thousand sq m. of lease area. The tower, which is currently growing and will measure 180 meters with the spire, is to be commissioned next year.

Near the Daszyńskiego roundabout, on Aleja Solidarności street, at the so-called Serek Wolski the construction of the Spark project is also under way. Two lower buildings have already been completed in the investment, and a 130 meter tower is under construction. Next year, after completing the construction of the entire project, Warsaw office market will gain 70 thousand sq m. of space.

This year, the commissioning of two 95-meter, twin towers Widok Towers is to take place. They are being built behind the new Rotunda near Dmowskiego roundabout. Both office buildings will provide the city with about 29 thousand sq m. of space.

Central Point is also under construction at the intersection of Marszałkowska and Świętokrzyska streets. The 22-storey Immobel building, which will have access to Świętokrzyska metro station, will offer over 19 thousand sq m. of space. The 93-meter office building is to be finished in the second quarter of 2021.

The 155-meter SKYSAWA tower will also emerge on Świętokrzyska street near the ONZ roundabout. PHN’s flagship project will provide office and commercial space. 39 thousand sq m. will be built in two buildings. In the first stage of implementation of the complex in 2021, a lower building A with an area of 11.5 thousand sq m. will be commissioned. The tower block is to be finished in the third quarter of 2022.

In the middle of last year, the construction of Forest complex began in the vicinity of Zgrupowania AK Radosław roundabout, nearby Arkadia shopping center. A 120-meter high tower and two lower buildings with a height of 6 to 8 floors will be erected on a 2 hectare plot at Burakowska, on the border of Warsaw’s Wola and Śródmieście districts. The lower buildings are to be ready by the end of this year, and the construction of the skyscraper will last until autumn 2021. The construction of the complex will provide Warsaw with 78 thousand sq m. of space to let. There will be restaurants and cafes on the ground floors of the buildings, and between them a pedestrian square and green areas. Burakowska Street will also be revitalized.

Several large mixed-use city-forming projects are currently underway in Warsaw. Their implementation, in addition to modern offices, will bring new hotels, conference spaces, retail and service space, food courts, as well as attractive city squares, places to relax and rest, as well as interesting amenities for the city’s residents.

– Mixed-use projects are one of the most important directions of the commercial segment development. Their implementation is often associated with the revitalization of post-industrial areas, which are brought back to life to provide attractive, publicly accessible urban space. Office space built in such locations is very popular among tenants. The variety of functions at the complexes provide tenants with much higher everyday utility than traditional office buildings. Therefore, creating attractive places to work and live, instead of delivering new buildings offering modern commercial space for rent to the market, becomes a standard for investors – notes Bartłomiej Zagrodnik.

One of the Warsaw projects based on the revitalization of historic factory buildings is Elektrownia Powiśle. The renovated buildings of the former Warsaw Power Plant, which are to be put into operation this year, will include a food court, Beauty Hall space and shops. The investment will bring about 15.5 thousand sq m. of retail and service space and 23 thousand sq m. of modern office space, as well as a boutique hotel with 150 rooms and 71 luxurious apartments for rent. City squares located between restored and new buildings will also be built in the complex.

Two investments implemented in Warsaw’s Wola District – Browary Warszawskie and Fabryka Norblina are of similar character. In the quarter of Grzybowska, Wronia, Krochmalna and Chłodna streets in the place of the former Haberbusch and Schiele Breweries, and later Browary Warszawskie, the construction of a residential, office and service complex is coming to an end. The investment, apart from residential buildings, includes two office buildings – Biura przy Willi and Biura przy Warzelni with a total of 46 thousand sq m. of space on offer. In Browary Warszawskie there is also a nineteenth-century villa in which the co-owners of the company, Feliks and Kazimierz Schiele once lived, as well as the building of the former brew house and 170-year-old, historic cellars, which after revitalization will take on a gastronomic character. Apart from the restaurant, Kumpel Atelier brewery will also be opened in the historical Leżakownia building. A new street and five city squares will also be built on the premises.

The second mixed-use complex located in Wola’s business center is Fabryka Norblina. The building situated at the intersection of Żelazna, Prosta and Łucka streets is to be ready in the second quarter of 2021. Fabryka Norblina will be an integral part of the city. Over 66 thousand sq m. of space are being built in post-industrial areas, of which 40 thousand sq m. will be occupied by offices. Over 26 thousand sq m. of space will have a commercial, catering, service, entertainment, cultural and wellness function. The area that once housed Towarzystwo Akcyjne Fabryk Metalowych Norblin, Braci Buch i T. Wernera will include a boutique cinema, BioBazar, museum, food hall with over 20 food concepts, Piano Bar with live music and a restaurant with a view of the center of Warsaw located on the 9th floor. Among the office tenants there will be co-working concept, new to the Polish market.

Mayland: we are preparing for new projects

Warsaw has been the hardest to get an office in 6 years, but 2020 brings a respite

The largest rail tunnel tunnelling shield will go to Lodz

End of construction another section of the second metro line